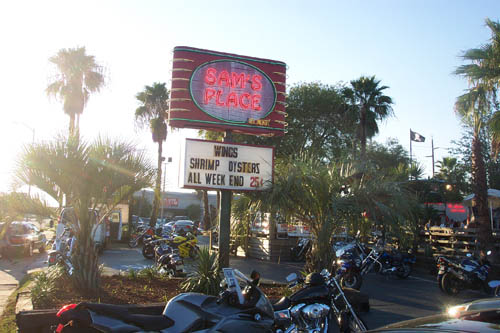 In 1975, Gene Mann & his partners in the Cattle Guard Restaurant in downtown Houston were on a hunting trip to their ranch in South Texas. As tradition would have it, they crossed the border into Boys Town, Mexico…to experience all that a Mexican border town had to offer. Their favorite watering hole was Sam’s Place, and it was there in a cloud of certainty and commitment to infamy that they decided to replicate the Sam’s experience back in Houston. In 1976, they moved an old house from Beaumont, Texas to an overgrown lot on Richmond Ave – a dirt road at that time. Sam’s Place del Norte was established on May 5, 1977. After Hurricane Allen, a Cat 5 Hurricane slammed into the Texas Gulf Coast in 1980. A shrimp boat “Wild Bill” was found wrecked on an oyster reef in Galveston Bay off the “flats” of Seabrook, Texas. The boat was relocated to an empty lot adjacent to Sam’s Place where it sits to this very day. Sam’s Boat launched in 1981 and has served authentic Tex-Mex, fresh seafood, ice-cold cerveza and notorious margaritas ever since!

In the years since Sam’s Boat on Richmond began, we have opened several additional Sam’s Boat locations around Texas. Find your nearest Sam’s Boat restaurant here.